> Blog > Consumption of CBD > How and why use a volcano vaporizer? 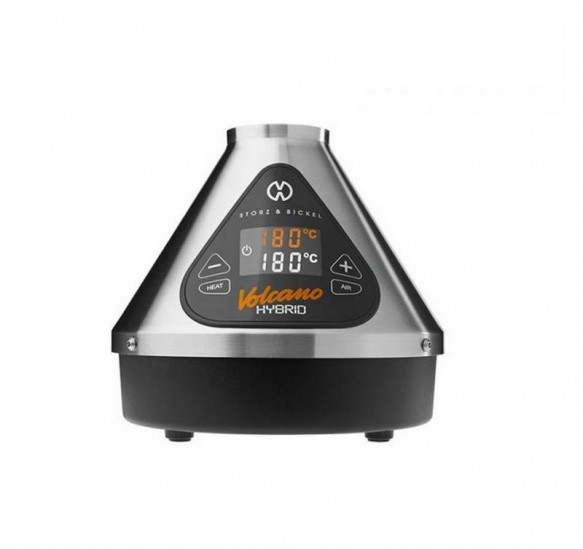 How and why use a volcano vaporizer?

The vaporiser is a device used in herbal and aromatherapy to release the active ingredients contained in plants and consume them in a less harmful way. One of the best known vaporizers is the volcano vaporizer.

In fact, the Volcano is arguably the most powerful vaporizer in the world. Its users appreciate it for its capabilities and robust design, but above all for its ease of use. Before you get it, we advise you to read this article in which we present you the functioning of the Volcano vaporizer as well as its numerous advantages.

What is a vaporizer?

A vaporizer is a device that allows its user to extract the active ingredients of a plant without reaching the combustion temperature, without having harmful effects on health and without degrading the substances.

This device is recommended in a medical setting according to recent studies, it is also used in herbal medicine and aromatherapy for therapeutic purposes. It is often used to consume cannabis and psychotropic drugs but in a less harmful way.

It is discreet to use because the steam produced has no odor that could bother or attract the attention of those around the consumer. It is transparent and dissipates quickly in the air. Vaporizers have recently revolutionized the world of cannabis consumption and more and more people are getting them to enjoy their benefits without having to smoke them.

The Volcano vaporizer, what is it for?

Cannabis smoke has harmful and additive effects, but thanks to the Volcano vaporizer, it has now become possible to use cannabis in a medical setting.

Indeed, studies have affirmed that vaporization is a reliable method of delivering cannabis to the patient/consumer without delivering the harmful smoke effects of its combustion by-products.

Vaporization also avoids inhaling carbon dioxide and other substances that tend to reduce blood flow to the brain and heart. The vaporization of cannabis then produces a physically less heavy effect than when smoking and allows better oxygenation of the organs. The vapor produced by volcano vaporization preserves the cannabinoids which are beneficial to the consumer's health.

What are the benefits of using it?

Here are some advantages that the volcano vaporizer provides to its user: 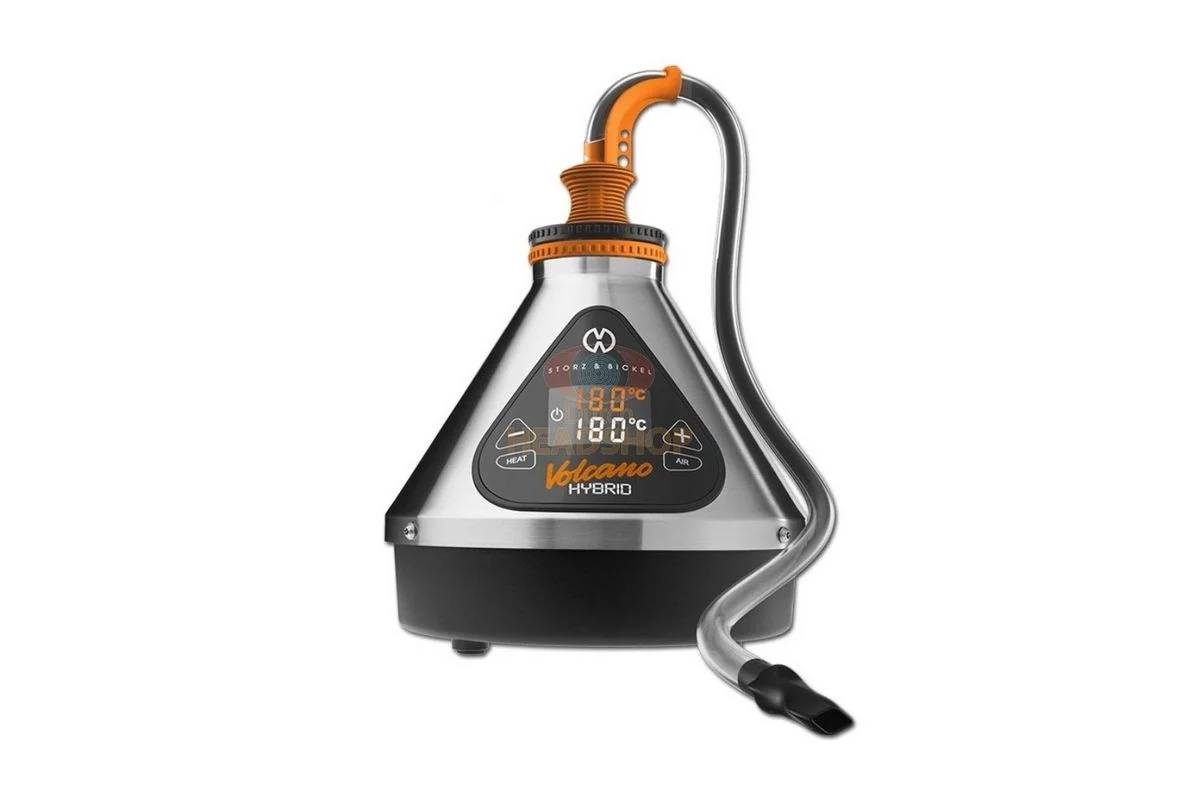 The disadvantages of the volcano vaporizer

Using the volcano vaporizer has many advantages, but there are still some disadvantages. First, its use requires electrical energy for advanced models, so you must have a socket or an accumulator nearby each time you use it.

Then, the high price of the volcano vaporizer can also be an obstacle to consumers, the price generally varies between 200 and 500 euros depending on the model chosen. Finally, its use requires serious precautions to be taken into consideration, for the safety of the consumer and those around him, it is also advisable to keep it out of the reach of children.

How does the Volcano vaporizer work?

Using the Volcano vaporizer goes through a few steps to produce vapor with health benefits. In this article, we explain how this revolutionary device works.

Plant matter in the grinder

It is often advisable to reduce the plants to be consumed in small pieces instead of putting them in large crumbs because the device will be more efficient. It also comes with a grinder in which to put the crumbled CBD flowers.

Thanks to a convection heating system integrated into the Volcano, the plant will have the consistency to fully extract the active ingredients it contains.

The Volcano vaporizer has a blower that produces vapor and leads it to a kind of balloon. The plant material will therefore go through stages of preparation as the balloons are linked.

The vapor produced by the first balloon is often the tastiest but not the densest. This first production contains pure terpenes and delivers the best flavors.

To produce steam, simply activate the blower, and this, before placing the balloon on the vaporization chamber. When the steam starts to escape, you will need to plug the balloon. The steam produced will be thicker as the balloons are linked together. It is possible to increase the heating temperature for more density and vapor.

Since the Volcano vaporizer has convection heating, only the blower “works” the plant material. The vaporization chamber accumulates heat over time and could spoil the aromas of the plants and lose the active ingredients.

It is therefore recommended not to leave the vaporization chamber on the vaporizer when it is turned on for a long time without having placed the balloons.

However, when the production of vapor decreases at the end of the vaporization session, it is advisable to leave the vaporization chamber on the Volcano to keep the vegetable matter warm and extract the maximum of active ingredients. 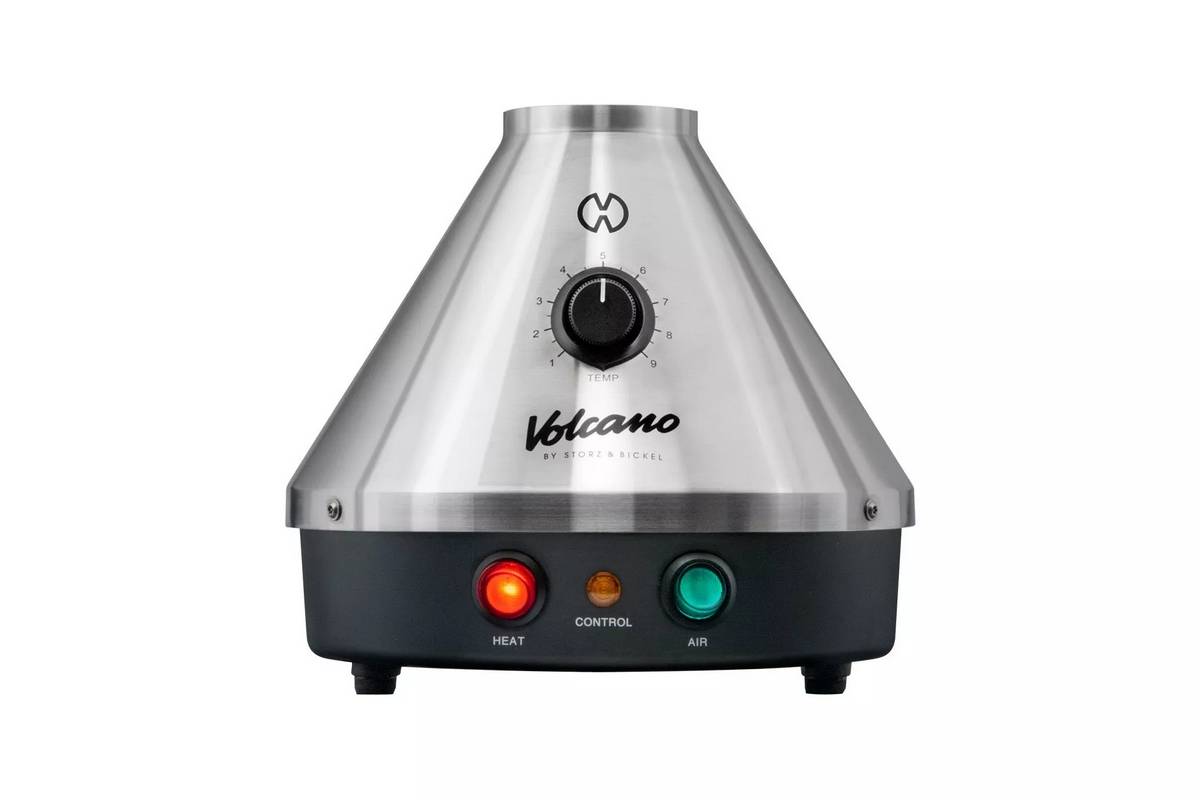 The Volcano's vaporization chamber is large and allows you to put a large amount of plant matter in it, which allows you to make several very dense vapor balloons. Generally, if the chamber is filled to 100%, this will meet the needs of about ten consumers. If you therefore plan to consume alone, it is advisable not to completely fill the vaporization chamber to avoid wasting vegetable matter.

However, filling a quarter of the Volcano bowl may produce less results and the vapor will be less dense. However, there is a way to avoid this, it is to obtain a Volcano chamber reducer as an option when purchasing the device. A vaporization chamber reducer will allow the device to perform well with less plants and will not let the air pass.

The temperature setting of the Volcano vaporizer

The Volcano vaporizer has a vapor storage system in the balloon which keeps it always fresh and delicious. This option also allows the user to be able to consume cold steam if they prefer.

The storage option allows the appliance to be used at high temperatures without necessarily immediately consuming the hot steam produced. The latter is however richer in active ingredients.

Although it has some disadvantages, the Volcano vaporizer remains an excellent alternative for cannabis consumption without adverse effects on neurons. 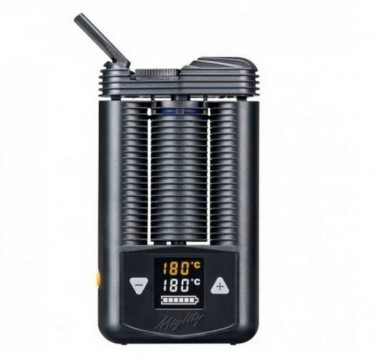 Crash test of the mighty vaporizer: Description, functioning and opinion

All about the Mighty vaporizer Crash test of the Crafty vaporizer : Description, functioning and opinion

Crafty vaporizer review: operation and use 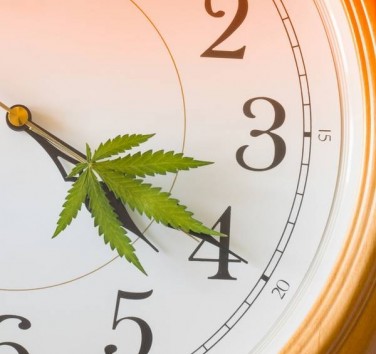 Why the number 420 is used to refer to cannabis: explanations
The content of our website is for information purposes only. It is not intended to provide medical advice. We recommend that you seek the advice of a medical specialist before consuming any CBD product featured on our website.
Newsletter
Subscribe to our newsletter to receive our tips and advice on CBD
Subscription